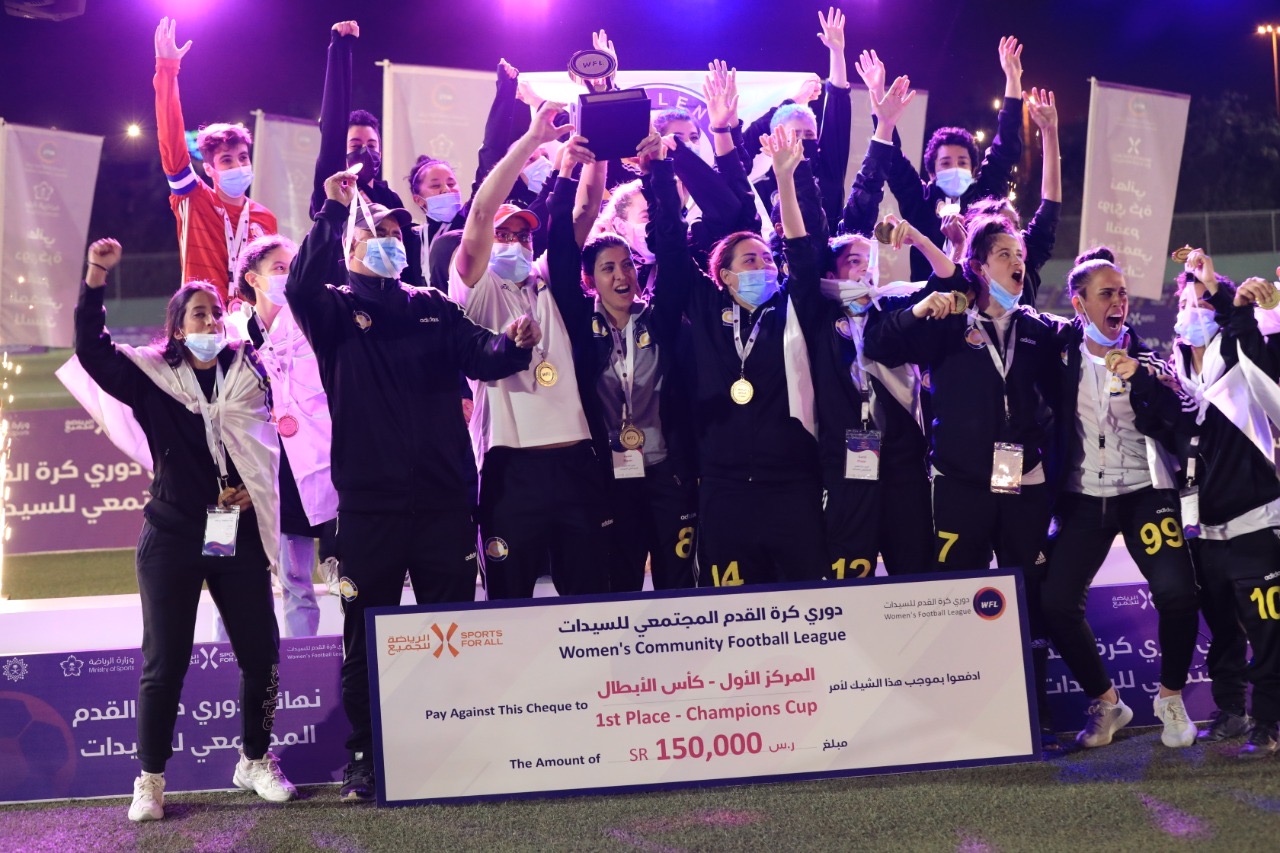 24 community-level teams from Riyadh, Jeddah, and Dammam competed in the WFL’s first season

Marking a historic moment in sports in the Kingdom of Saudi Arabia, the community level Women’s Football League (WFL) saw a rousing finale to its first season with Challenge Team taking home the Champion’s Cup and an award of SAR 150,000.

Developed by the Saudi Sports for All Federation (SFA) with the close guidance of the Ministry of Sports, and supported by the Quality of Life program, the WFL commenced gameplay on November 17, 2020 with the participation of 24 teams from Riyadh, Jeddah and Dammam, and participants ranging in age from 17-30.

The first League of its kind in the Kingdom, the gameplay season included a city qualification round and culminated in the Champion’s Cup, which included the finalists from each city along with the best second-place team. The finals began on December 10, with the semi-finals between Eastern Flames vs. Challenge Riyadh, and Jeddah Eagles vs. The Storm, to have the final match between Challenge Riyadh vs. Jeddah Eagles played on December 17.

“The Sports for All Federation, with the strong support of our Minister of Sports, HRH Prince Abdulaziz bin Turki Al-Faisal Al Saud, was proud to award the first-ever winners of the Women’s Football League. This landmark moment in our country’s community-level sports history could not have been possible without the vision and forward trajectory laid out for us by His Majesty King Salman, and HRH the Crown Prince, Mohammed bin Salman,” said Prince Khaled.

“The determination that our WFL players showed was only matched by the coaches, referees and on-group support team. I congratulate you all on living up to the high standard that His Majesty and His Royal Highness have set for us, today you have made Saudi proud,” he continued.

The WFL Committee announced the top scorers and best goalkeepers for the group stage in each city. The top scorers from Riyadh were: Sara Al Hamad from Sama Team and Nour Ibrahim from AlYamamah Team, Jeddah’s top scorers were Berine Sadakah from Jeddah Eagles Team and Taqiyah Rashwan From Miraas Team, and Dammam’s top scorers were Carlota Loza from United Eagles Team and Maryam Al Angary from Eastern Flames Team. Additionally, the best goalkeepers from each city were Afaf Al-Mutairy from Riyadh’s Challenge team, Hessah Al Sudairy from Jeddah Eagles, and Victoria Harrod from Eastern Flames.

Initially launched in February 2020, both teams and individuals were welcomed to register for the WFL until the end of September. In total 24 teams participated across the three regions, with four of the teams newly formed. The players on the new teams were individuals who had the passion to play football, but were not yet part of an official team.

As part of the SFA’s initiatives to encourage female sports participation, and with a view of developing and enhancing infrastructure for women in sports, the WFL committee assigned a team of coaches to the newly-formed individual teams comprised of four international coaches and four local coaches. 12 of Asia’s best female elite referees were flown to Saudi to referee all WFL matches, as well as training 40 Saudi junior female referees. The first on-ground training of its kind, learning took place in workshop delivery and practical coaching to upskill local sports talent.

Prior to the League kickoff, teams were sorted into groups following a virtual draw, with all team managers online to observe the procedure and announce the league schedule. In addition to strict adherence to the Health and Safety Precautions Protocol laid out by the Ministry of Sports and Weqaya (National Center for Disease Prevention and Control), firm measures were applied during all match days that included social distancing, minimizing physical engagement, and periodic COVID testing prior to matches for all teams, staff, and organizing members on-ground.

The Group stage began on November 17 in Riyadh and Jeddah with a total of 21 matches in each city, and the final knockout match between the two group leaders in each city to allow the city champion a secured slot in the Champion’s Cup. The Eastern region began on November 18 with a total of four teams in one single group and a total of six matches – the group leader was the automatic qualifier to the Champion’s Cup. In addition to the city winners, the second best-team – The Storm, Jeddah – based on points also qualified to the Champions Cup. Once the group stage concluded, the runners-up for each city were Sama team from Riyadh, The Storm team from Jeddah, and Al Mamlakah Team from the Eastern region.