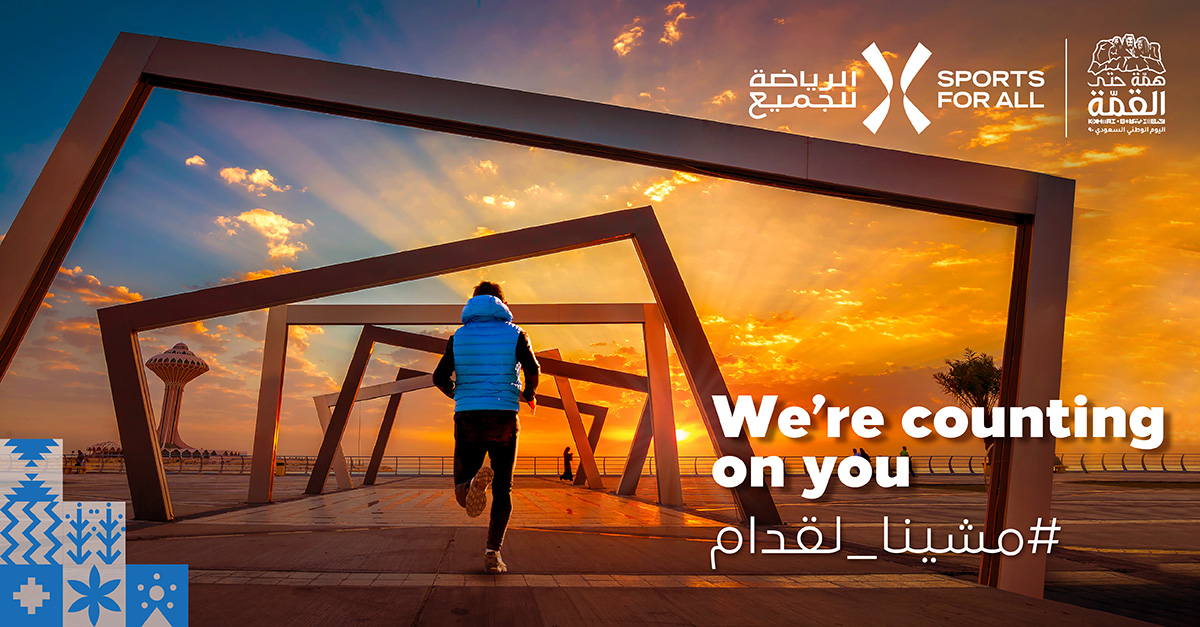 The Sports for All Federation (SFA) is calling for people across Saudi Arabia to commit to wellness in the Kingdom by striding forward in unison. To mark Saudi National Day on Wednesday, September 23, the SFA is inviting people to step, walk and run in honour of the country; to put their best foot forward and signal their intentions to help lead Saudi Arabia into a healthy, active and positive future.

The Federation hopes to see at least 7,055 people participate in its National Day Campaign, representing the 7,055 kilometres that make up the country’s land and sea borders. Every type of exercise and physical activity is welcomed, so share all of your workouts and participation! Gymnastics, hiking, boxing, skating… we want to see all of us moving for the nation!

The number of participants will be tracked across SFA’s social media channels, with each new participant lighting up a section of the border on a virtual map of Saudi Arabia.

People of all ages and abilities from across the Kingdom’s provinces are encouraged to join the mass event to mark the 90th National Day, and are requested to share photos and videos of their participation using the hashtag “We’re Moving Forward” مشينا_لقدام# on Instagram and Twitter.

There are no target steps or distances for people to reach; rather, citizens and residents alike are being asked to show their patriotism through fitness and wellbeing. It is the latest in a long line of events, activities, challenges and campaigns launched by SFA to encourage a more active Saudi Arabia, including Move to Game, which has seen people take in excess of 8 billion steps, and Step Together in July, during which participants ran and walked a combined distance of 44,850 kilometres.

Under the banner of the Quality of Life program and closely supported by the Ministry of Sports, the Federation seeks to contribute to Vision 2030 by growing physical activity levels across the country, ensuring that a healthy mindset is mainstream in Saudi society, and working towards the nation’s goal of increasing participation in weekly sports to 40% of the population by 2030.

As well as the individual benefits of a more active lifestyle, there are economic ones, too. A study by Rand Corporation in 2019 estimated that by 2025, the global GDP could be between up to $338 billion (SAR1.27 trillion) higher with increased activity, compared to physical activity levels at the time of research. By 2050, the increase could be as much as $760 billion (SAR 2.85 trillion), according to the study.

Keeping active not only improves your quality of life, but is an act of community service to the country by motivating those around you to get moving as well. So, join SFA as it celebrates Saudi National Day by honouring the past, making the most of the present, and stepping into the future.

Related: A message from our President to our healthy active community