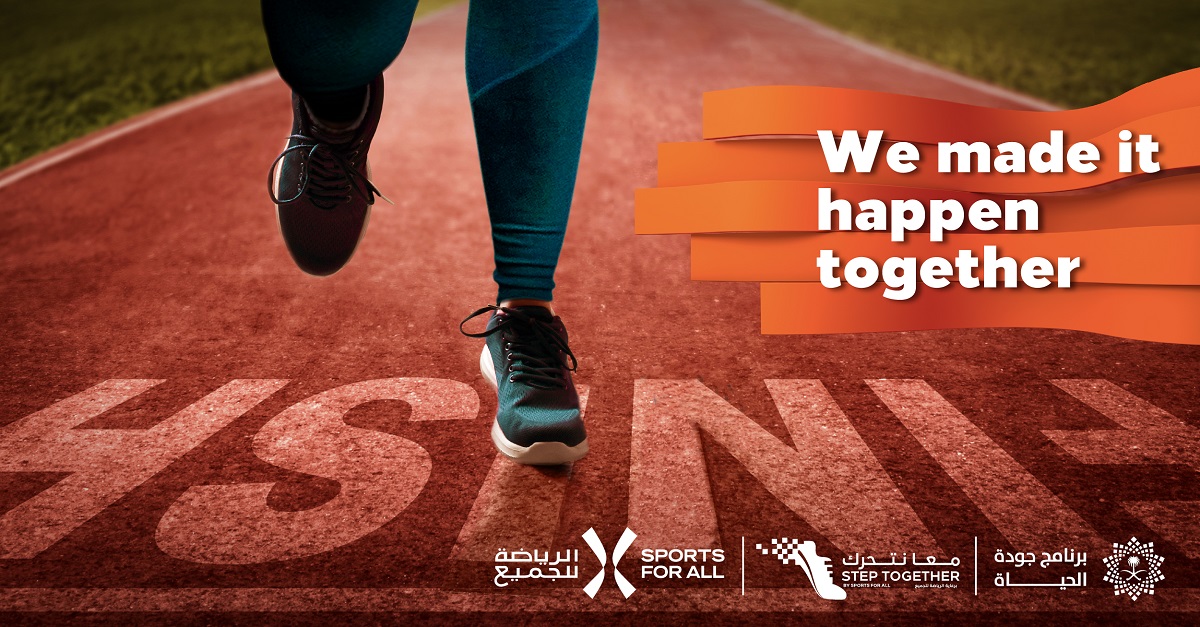 The Saudi Sports for All Federation (SFA)’s inaugural Step Together initiative saw 2,626 people register, with participants walking and running a combined distance of 44,850km over the 10 day event. The SFA’s half and full summer marathon saw nearly 30 para-athletes join the competition, a hallmark achievement for the Federation’s inclusivity benchmark. Step Together was held under the banner of the Quality of Life program, which seeks to contribute to Vision 2030 by maintaining and growing physical activity levels across Saudi Arabia during the summer months.

The series of competitive walk-runs was the first SFA event since the lifting of lockdown restrictions, taking place between July 17 and July 26. Open to all ages, abilities, and demographics, the event invited both individuals and teams to complete either a virtual 42-kilometer full marathon or a 21-kilometer half marathon within the timeframe. Children under the age of 15 were challenged to complete 10 kilometers during the same period.

More than 2,600 people registered with 62.8% people taking part in the full marathon, 30.9% people in the half marathon, and 6.4% in the kids race. Step Together participants used digital fitness trackers to record and upload data to the Race Result platform, which posted ongoing progress and results on its publicly viewable leaderboard.

“We were thrilled to see such high registration numbers for our first Step Together event,” said HRH Prince Khaled bin Alwaleed bin Talal Al Saud, President, SFA. “Of particular importance to us was the diversity of participants for the first in the walk-run series. We actively recruited all ages and all abilities for this event and are delighted that they made it their own. It truly was Sports for All as we had many children and seniors take part, and we were proud to have a number of disabled competitors.”

While the vast majority of participants were Saudi nationals within Saudi Arabia (71.78%), almost a quarter were residents of Saudi (23.19%). More than 40 nationalities were represented overall, with smaller numbers of foreign nationals outside of the country (4.67%) and Saudi nationals outside of Saudi (0.78%) also competing. All those who met the distance goals were awarded with finishing medals and e-certificates of achievement.

As well as proving successful in terms of popularity and participation Step Together scored highly in satisfaction levels; 97.8% of participants said it was a good initiative to keep the community active. A post-event survey saw 93% of participants rated their satisfaction as 8/10 or higher, with 68.7% rating it a perfect 10. When asked how likely they are to take part in future events, 98.1% gave scores of 8/10 or higher, with 91% giving a 10.

The fastest time in the 42.2km event was recorded by Hassan Samih Abunameh, who completed the marathon in 2 hours, 42 minutes and 56 seconds. He was followed by Mane Alotabe (2 hours, 49 minutes, 47 seconds) and Ahmad Yoosuf, who was running with the R7 Run Club (2 hours, 54 minutes, 25 seconds). The fastest woman was Jumana Alshammary, who completed the distance in 3 hours, 8 minutes and 2 seconds.

Many participants of Step Together are also taking part in the continuing Move to Game initiative, completing challenges and daily steps in parallel. Jointly developed by SFA and the Saudi Arabian Federation for Electronic and Intellectual Sports (SAFEIS), Move to Game is an innovative online tournament that merges gaming and physical fitness with a series of online and offline challenges.

The SFA will shortly be announcing details of its next Step Together activation. Planned for September, the forthcoming event will again welcome all abilities and ages to register.