Participants from across the country set out to walk or run 90 km in honour of Saudi Arabia’s 90th National Day, as part of the wider ‘We’re Moving Forward’ campaign

More than 900 people walked and ran across Saudi Arabia as part of the Saudi Sports For All Federation’s (SFA) second Step Together program, racking up more than 55,000 km over a series of weekly challenges.

Held in partnership with Nike, the latest edition of Step Together launched on September 13 and concluded on October 13, with four weekly challenges amounting to a total of 90 km, in celebration of Saudi Arabia’s 90th National Day through community health and wellness. The program also played a role in the success of the SFA’s massive “We’re Moving Forward” campaign that asked people to share their workouts and participation in sports and physical activities as a patriotic duty under the Arabic hashtag #مشينا_لقدام

The first challenge was a 15 km walk-run, with the second challenge of 20 km starting on September 20. Challenge three went top to 25 km on September 27, while the fourth and final weekly challenge of 30 km started on October 4 and concluded on October 13. Throughout the initiative, official SFA partner Nike showed a dedicated leaderboard on its Nike Run Club (NRC) app.

“On social media, we like to say that there is no one more powerful than our healthy active community; the past few months of people’s participation have shown this to be true,” said HRH Prince Khaled bin Alwaleed bin Talal Al Saud, President, SFA.

“This second iteration of Step Together staged with our partners at Nike was really exciting especially since it was a month-long challenge with significant distances.

“The Quality of Life program has built the foundation from which this second successful Step Together program could spring, and we’re always working closely with the Ministry of Sports and the Saudi Arabian Olympic Committee to craft more programs that will get people moving.”

“As our first major activation in partnership with the SFA, we were thrilled to see people of all ages participate in the challenge and to share their progress in real-time on social media. Nike is proud to play a key role in catalyzing community fitness in the Kingdom, supporting more people to safely enjoy these healthy and active moments while championing physical activity overall,” said Mohammad A. Baker, Deputy Chairman and CEO of Gulf Marketing Group (GMG), Nike’s distributor in Saudi Arabia and the wider GCC.

Riyadh, Makkah and the Eastern Province saw the lion’s share of action within the country, and the walk-run saw more than 40 nationalities represented in the initiative.

Of the 930 people who took part in the challenges, men accounted for 74.2% while women’s participation clocked in at 25.8%.

The strength of Community Sports Groups was also on display during the four weeks, making up 39% of the total participants. The most well represented group was the R7 Run Club, which fielded 61 participants, followed by Moshat Jeddah (58 participants), Masafat Club (41), Dwte3m (41), Jeddah Running Community (34), Qatif Runners (33), and several others.

The results of an event survey showed how well received the initiative was, with 69.8% of participants giving it a perfect score of 10/10 for ‘level of satisfaction’. The average score across all respondents was 9.3/10. Some 87.8% of people responded with 10/10 when asked how likely they were to participate in a future event, with an average score of 9.7/10 given when asked how likely they were to recommend this event to others.

Perhaps most importantly, however, 94.7% per cent of people agreed that Step Together was a good initiative to keep the community active.

The month-long activation was a follow-up to the inaugural Step Together in July, which saw more than 2,600 people walk-run either half or full marathons across 10 days covering a combined distance of 44,850 km.

Nike and SFA have been official partners since the start of 2020, when they signed a Memorandum of Understanding to catalyze community fitness. The MoU was the first of its kind in Saudi Arabia, designed to boost the support of Community Sports Groups, develop running and fitness programs, and encourage sport participation across the Kingdom. SFA’s relationship with Nike first dates back beyond the MoU, with the company supporting the Saudi Greens team in New York and Copenhagen during their participation in the 2019 Global Goals World Cup.

Step Together is just one of a raft of initiatives and events launched by SFA designed to affect behavioral change around the Kingdom, encouraging the adoption of physical activity and family fitness.

Related: Move To Game celebrates a landmark of 10 billion steps generated by more than 150,000 participants across Saudi Arabia 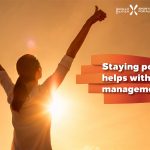 Put the power of positive thinking to work 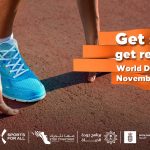 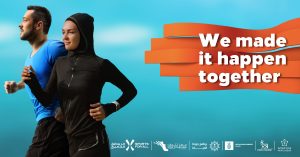 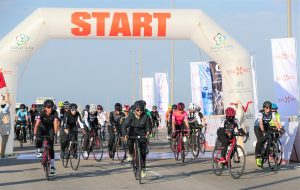