Riyadh Marathon witnesses more than 10,000 participants from all across Saudi regions and the world 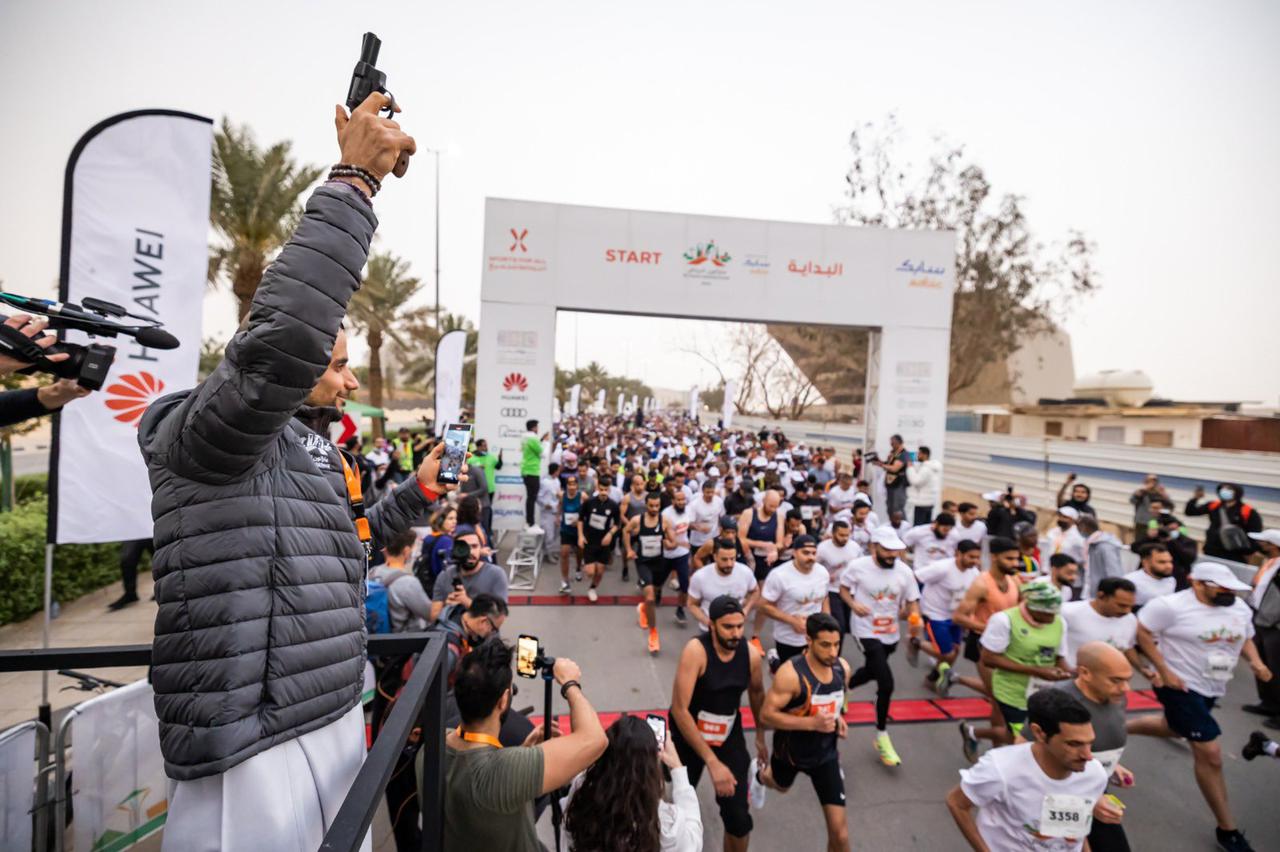 The Saudi Sports for All Federation (SFA) has successfully hosted the second edition of the Riyadh Marathon, which took place today in the heart of the Saudi capital and attracted over 10,000 participants from across KSA regions and the globe. The landmark international sports event was Saudi Arabia’s first full-fledged marathon accredited by both the Asian Athletics Association and World Athletics and is one of SFA’s biggest events to date, marking a significant milestone in the Federation’s journey to promote the benefits of physical exercise among all members of society in the Kingdom.

The 42-kilometer racecourse brought together thousands of sports enthusiasts and runners from around the Kingdom and the world, as well as countless spectators keen to witness the historic event and enjoy the festive atmosphere. The marathon was arranged with direct support from the Ministry of Sport, the Quality of Life Program, the Saudi Arabian Olympic and Paralympic Committee, King Saud University, National Entertainment Center, and the Saudi Arabian Athletic Federation. 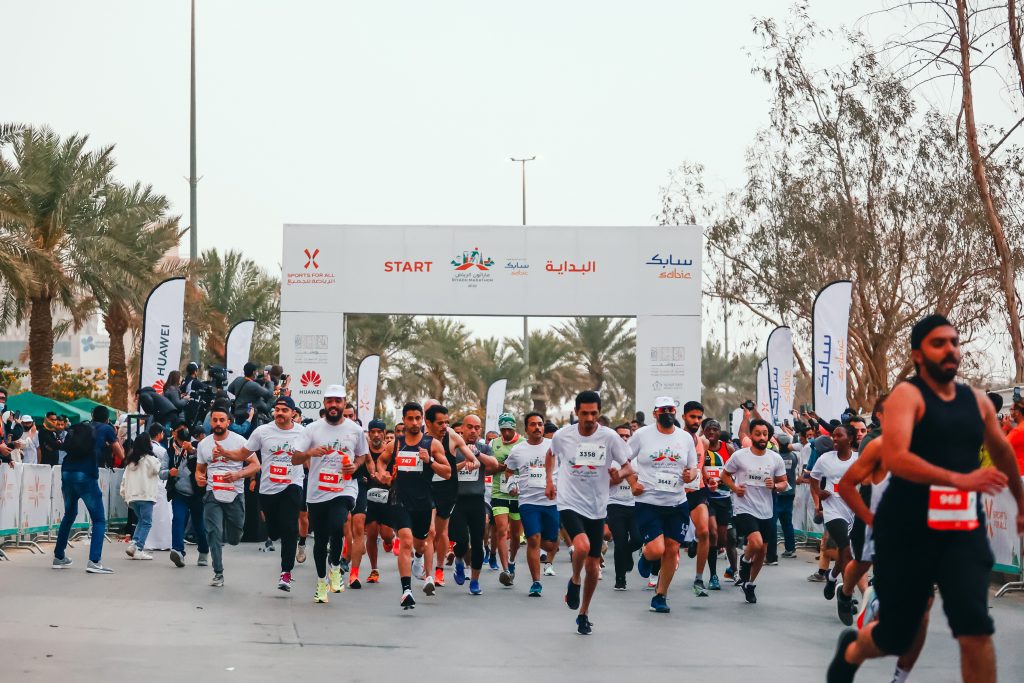 Riyadh Marathon 2022 kicked off at King Saud University at 06:15 am, with the race passing historical Diriyah, Prince Mohammad bin Salman Road and other main roads, King Abdullah Financial District and the Digital City before runners finally circled back to the finish line at the University. The route was designed to enable participants to explore the capital’s breathtaking touristic scenes and attractions. The top competitors crossed the finish line to the applause of thousands of other participants and spectators and were awarded prizes worth over SAR 2 million along with medals engraved with Riyadh Marathon to celebrate their sports achievement and participation in such a historic event.

The outcomes of this race have resulted in a great leap in Saudis’ participation in physical activity and running, with the representation of citizens who took part in the race reaching 57%. The remaining participants included runners from other countries around the world, including the Philippines, India, United Kingdom, Pakistan, United States of America, Egypt, and Jordan.

In line with SFA’s drive to encourage participation in physical activity, Riyadh Marathon 2022 was designed to be a highly inclusive event with multiple races for people of all ages, gender, and physical abilities. Aspiring athletes and amateurs took part in a 21.1-kilometer half-marathon while beginners and running enthusiasts participated in a 10-kilometer race, marking their first steps on a lifelong commitment to movement. 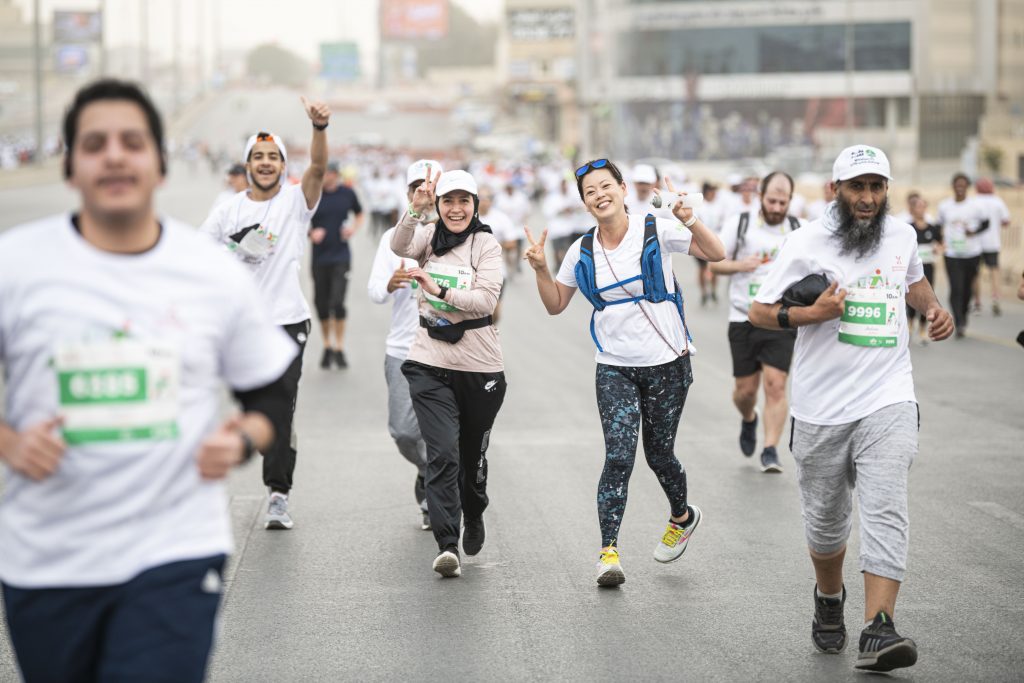 SFA also hosted a Marathon Village from 4 to 5 March where participants and guests enjoyed a range of fun activities, food trucks, live entertainment, and fitness classes, among others, that were catered to accommodate all members of the community.

On this occasion, His Royal Highness Prince Abdulaziz bin Turki Al-Faisal, Minister of Sport and President of the Saudi Arabian Olympic and Paralympic Committee, commented: “The sports sector, due to its growing importance, has been receiving great support from our wise leaders, His Majesty the Custodian of the Two Holy Mosques King Salman bin Abdulaziz Al Saud and His Royal Highness Crown Prince Mohammed bin Salman, which is reflecting positively on the increase of physical activity levels. Their guidance and support have also been crucial to hosting global sports tournaments with unprecedented achievements, in line with the ongoing efforts toward achieving Saudi’s Vision 2030 goals and increasing the sports sector’s contribution to the national GDP.”

HRH added: “We are extremely pleased that the second edition of the Riyadh Marathon, which is a continuation to many sporting events that the Kingdom is proudly hosting, was a resounding success as it witnessed the participation of more than 10,000 people from all segments of society from all across Saudi Arabia and the world. Our ultimate aim is to promote the culture of sports and increase the level of participation in physical activity within our beloved country”.

The launch of the Riyadh Marathon follows the success of the 2018 Riyadh Half Marathon, a precursor to this year’s event that attracted more than 11,000 participants from different nationalities, ages, and physical abilities. Saudi Arabia’s first-ever full marathon in Riyadh further enhances the Kingdom’s international status as a global sports destination, while also driving growth in the sport and tourism sectors, and positions the capital Riyadh as an ideal location for future events in line with Saudi Vision 2030 objectives.

The official marathon starting signal to the runners was released by His Royal Highness Prince Khaled bin Alwaleed bin Talal Al Saud, President of the Saudi Sports for All Federation, where he joined the participants for a 4-kilometer race and commented later, saying: “The Riyadh Marathon and side activations were pure adrenalin; you could feel the energy, enthusiasm, and passion of everyone involved. The Marathon was an activity that brought the city to life with the intention of community enrichment and wellness, and we are thrilled with the outstanding results. The success reflects the community’s growing enthusiasm for sporting events of all kinds. Today’s race marks a significant step on our journey to build a healthy and vibrant community by inspiring all members of society to adopt exercise as an integral component of their daily lives. I would like to thank everyone involved in bringing this historic event to life and helping Riyadh and Saudi Arabia set a new global benchmark for the successful organization of international races. We are looking forward to activating many more initiatives and sporting events to encourage people of all ages and physical abilities from both genders to embrace the benefits of regular physical activity.”

The Saudi Sports for All Federation (SFA) is the main body responsible for developing community sports in the Kingdom. The Federation seeks to build a healthy and vibrant community by inspiring all members of society to be physically active, in line with the Quality of Life Program objectives of boosting the percentage of people in the Kingdom who regularly exercise to 40% by 2030.

Riyadh Marathon 2022 was sponsored by the Official Presenting Partner Sabic, one of Saudi Arabia’s leading multinational petrochemical companies, together with ROSHN Real Estate Company, one of the Public Investment Fund companies, in the role of Main Partner, and Huawei, which served as the Official Timekeeping Partner for the event. Additional official supporters included Jeeny, PureGym, Tawuniya Vitality, Decathalon, AvalonActiv, Aquafina, Audi, and MDLBeast.