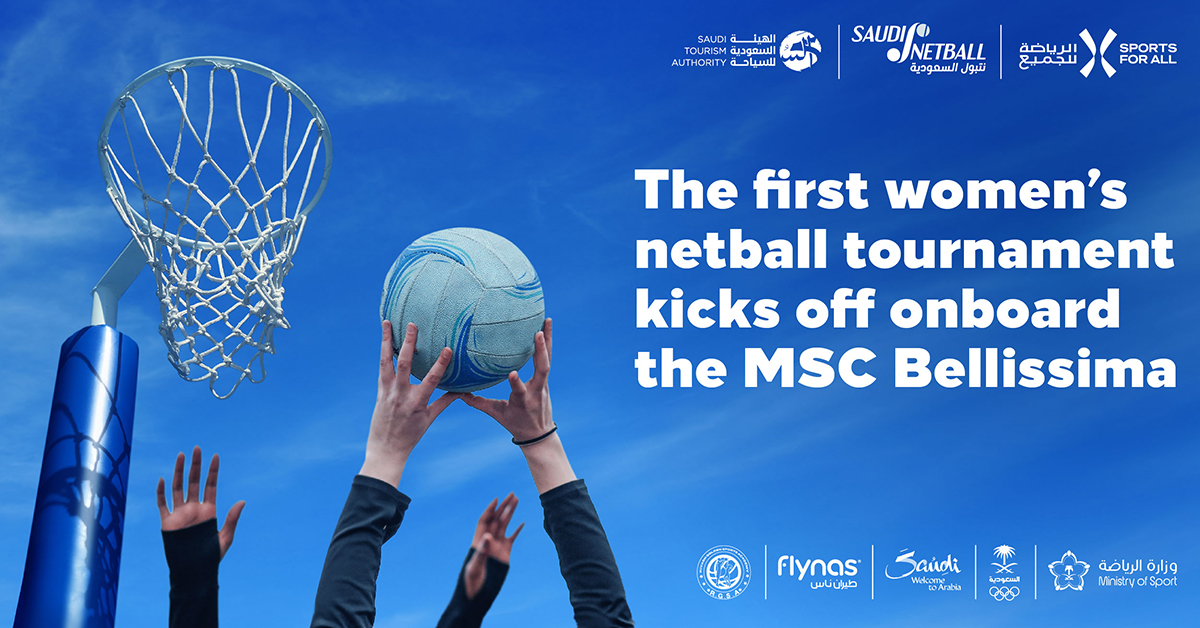 Saudi Netball, in collaboration with the Saudi Sports for All Federation and the Saudi Tourism Authority, today announced the first netball tournament in Saudi Arabia’s history. The tournament will be held onboard the MSC Bellissima, a 4,500-passenger cruise ship that is currently touring the Red Sea for the first time.

Netball is a fast-growing global game played by more than 20 million people in more than 80 countries. The promotion of netball, which is a women-dominated sport, is part of Saudi Arabia’s ongoing initiative as part of Vision 2030 to increase women’s involvement in sport as part of a healthy and active lifestyle.

“Inclusion, the diversification of sports in the Kingdom, and accessibility to sporting activities are three key objectives that drive our efforts to develop Netball in the country,” said HRH Prince Khaled bin Alwaleed bin Talal Al Saud, President of the Saudi Sports for All Federation. “Netball stands out as a sport that delivers on these three objectives. The Sports for All Federation sees a sizeable opportunity to support the development of netball in Saudi Arabia; its an interesting and fun actvity that promises increased fitness and enhanced health, while encouraging the spirit of friendly competition .”

“Netball is an ideal sport to introduce across schools in the Kingdom,” said HH Princess Ghada bint Abdullah Al-Saud, Chairwoman of Netball Saudi. “As a game, netball is inviting, accessible, encouraging, fun, and inclusive. Its game rules ensure the equal participation of all players on the court. In netball, everyone contributes equally to the success of the team, regardless of the individual role they play. It is the perfect expression of an inclusive society.”

Netball Saudi is one of sixteen sports federations and committees announced by the Saudi Arabian Olympic Committee in May 2021, as part of the efforts to widen the range of sports offered and the number of sporting communities in the Kingdom.

The three-round tournament will be played by two teams with a total number of sixteen players ranging from 13-23 years old, and been practicing Netball in the Riyadh-based Golden Sports Academy.

The tournament is a joint community sports-tourism initiative showcasing Saudi’s continued progress toward building a vibrant society, a core pillar of the Saudi Vision 2030.

Sports tourism, which includes traveling either to watch or to participate in a sporting event, is one of the fastest-growing areas of the global tourism sector. Sport-related travel creates direct economic value across a wide range of supporting sectors, including entertainment, transportation, and hospitality. This supports a relative proportion of jobs, wages, taxes, and GDP within each sector.

The initiative is another stepping stone in the SFA’s mandate towards increasing the number of people undertaking regular physical activity in the Kingdom to 40% by 2030, and the Federation is helping meet this target by facilitating sporting opportunities and initiating campaigns encouraging exercise for people of all ages, abilities and backgrounds.