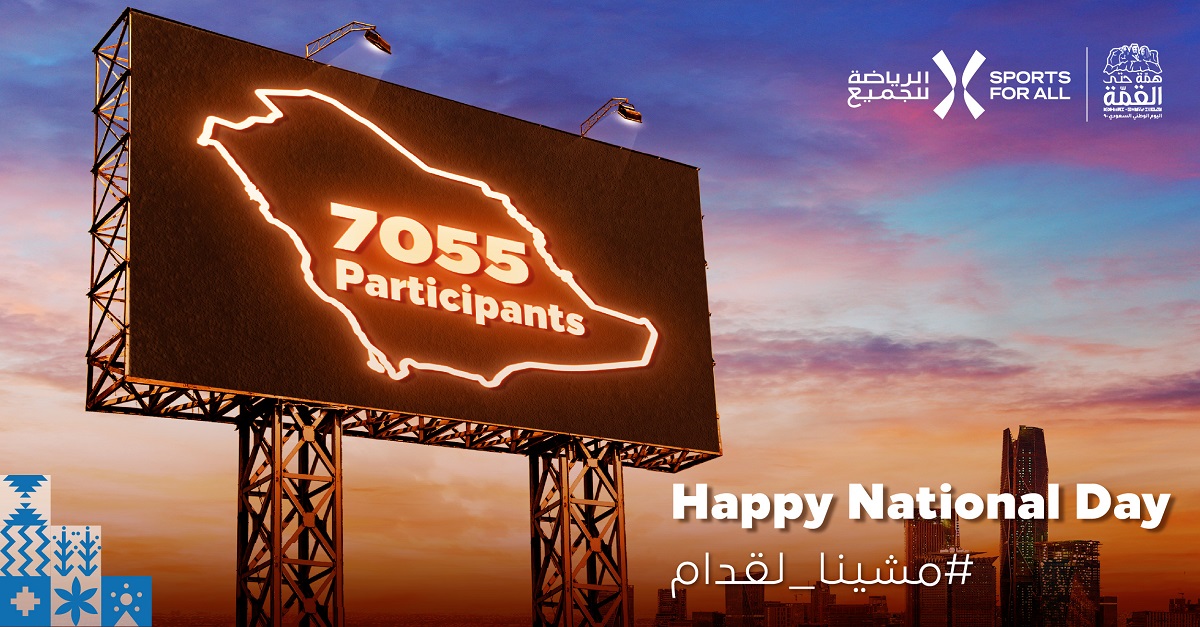 Saudi Arabia’s active community united in honor of the Kingdom as people from across the country joined the Sports for All Federation (SFA) in celebrating National Day. The SFA conceptualized the We’re Moving Forward (#مشينا_لقدام) campaign to galvanize its audience and spread physical fitness in honor of the Kingdom’s most important celebration.

Mandated with increasing participation in sports and physical activity, the SFA emphasized that there was no better way to celebrate Saudi Arabia than by being physically active and encouraging others to join the wave of movement and health sweeping the nation.

Over a 20 day period from September 10-30 nearly 8,000 people walked, ran, exercised and played a wide range of sports to mark the Kingdom’s 90th commemoration. The participants exceeded the Federation’s initial goal of 7,055, meant to represent the 7,055 km that make up the county’s land and sea borders, with each new hashtag usage lighting up a border section of a virtual map of Saudi Arabia.

Closely supported by the Quality of Life Program, the initiative was designed to showcase the patriotism of Saudi Arabian society through physical activity, health, and wellness. The SFA encouraged people from all over the country to mark the occasion across the 20 day campaign, with people of all ages and abilities taking part and signalling their intentions to help propel the Kingdom into a healthy, active and positive future.

Participants shared thousands of photos and videos of their activities on all social media channels, primarily focusing on Twitter and Instagram, using the Arabic hashtag of “We’re Moving Forward” #مشينا_لقدام. Many of the program’s participants presented Saudi flags or wore Saudi scarves and memorabilia while working out.

The campaign enjoyed high profile support from some of the Kingdom’s most respected statespeople, explained HRH Prince Khaled bin Alwaleed bin Talal Al Saud, President of the Saudi Sports for All Federation. “One of the greatest moments of this campaign was having the intense interest of the Minister of Sports, HRH Prince Abdulaziz bin Turki Al-Faisal Al Saud. He was an avid watcher of the SFA’s community Instagram stories, cheering on our program participants while they were posting their workouts and sports with parents, with children, with colleagues. We were proud to capture the country’s fire and spirit for our national health and wellness drive,” said Prince Khaled, highlighting that the strong alliance with the Ministry of Sports and the Saudi Arabian Olympic Committee bolstered the campaign’s growth.

“Saudi Arabian Ambassador to the United States, HRH Princess Reema bint Bandar Al Saud, was also cheering our community online, actively engaging and viewing our stories throughout the National Day program,” he added. Prince Khaled thanked the SFA Board of Directors for contributing their support over social media, and for avidly monitoring the Federation’s progress towards 7,055 participants.

To date, the campaign has enjoyed 30 million impressions with 3.7 million video views, and more than 170,000 engagements with the number climbing daily. The official hashtag received well over 7,000 mentions of participation from both genders and a wide range of age groups, though youth had by far the biggest share with 70% of mentions generated by users aged between 18 and 35.

The National Day campaign was the latest SFA activation to encourage a more active Saudi Arabia. In recent months the ongoing Move to Game program has seen more than 150,000 people take billions of steps, with two cycles of the Step Together program also taking place. In July, participants walked and ran a combined distance of 44,850 kilometres, while the second program – comprised of four weekly challenges – will conclude on October 13.

In addition to events, SFA has boosted participation in sports and physical activity through key private sector partnerships, and collaborations with various sports federations around the Kingdom. One key partnership is with the Ministry of Municipal and Rural Affairs (MoMRA), with which SFA recently signed an MoU to launch activations in public parks across three cities – a crucial step in delivering its Active Places mandate.

Active Places is one of three initiatives SFA is responsible for delivering as part of the Quality of Life Program under Vision 2030; the other two being Active People and Initiatives for Residents of Saudi Arabia. Through these initiatives the Federation seeks to grow physical activity levels across the country, ensuring that a healthy mindset is mainstream in Saudi society and working towards the nation’s goal of increasing participation in weekly sports to 40% of the population by 2030.